Red wine and champagne are two of the most romantic drinks out there, so it only makes sense for me to feature a Valentine’s Day cocktail that has both champagne and ruby port, which is a red dessert wine. I know it has a scary name, but bear with me. This cocktail has an extremely special (read: romantic) place in my heart, and features two of my favorite, er, “adult beverages.” 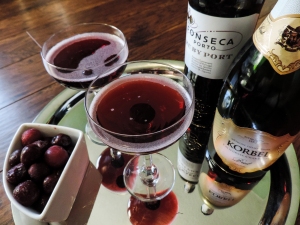 I first had this cocktail on my honeymoon, in this amazing little bar called The Bombay Club in New Orleans. (Side note: New Orleans is an excellent place to honeymoon if you like to take long, scenic walks and day drink, because you can do both of those things there AT THE SAME TIME.) We had just left Bourbon Street after a very noisy, slightly overwhelming twenty minutes (Sorry, I’m 70 on the inside.) and were looking to wind down a bit before heading back to our hotel.

We had seen an ad for happy hour at The Bombay Club and decided to stop in. Little did we know, they were closing in 45 minutes and we were the only people inside. It was long enough to order this cocktail and have a very interesting conversation with the bartender while he closed up shop. He was a veritable fount of wisdom, and taught us things such as the dangers of kids menus and that I “had a lot of strange personality traits.”

He also told us the story of poor Admiral Nelson and the origins of the cocktail’s slightly… unnerving name. Apparently, Horatio Nelson was an 18th century British naval officer. He perished in battle during the Napoleonic wars and, so that he could be buried in his home country, was entombed in a barrel of rum. According to the legend, the sailors punctured a hole in the barrel and drank the rum, which was now intermingled with his blood, perhaps thinking they could absorb some of his bravery. When they got back, they brought with them tales of the Admiral’s great feats of battle, and cocktails paying tribute to him arose in pubs all over. Since they couldn’t just go around serving bloody rum, ruby port was added to give that oh-so-appetizing blood red tint. Tasty, right? And finally, they replaced the rum with champagne and ended up with this spectacular creation.

Now that I think about it, maybe that bartender was right. It is a little strange that I am obsessed with this cocktail for Valentine’s Day, but you should try it anyway. It only has three ingredients, requires no special mixing, shaking, or stirring, and is downright delicious. Not to mention that beautiful deep red color. The port, which is traditionally a dessert wine, adds a touch of sweetness to the dry champagne, though this is not too sweet or heavy so would compliment some dark chocolate cupcakes with red wine buttercream quite nicely. 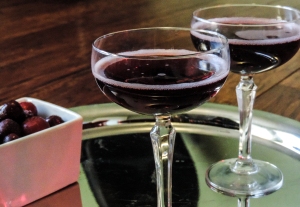 Admiral Nelson’s Blood
1 oz Ruby Port
1 dark sweet cherry (I used frozen. The original recipe from The Bombay Club called for Luxardo cherries, but I couldn’t find any and frozen cherries are easy to find, delicious, and have that deep red color we want.)
Extra Dry or Brut champagne

In a champagne glass (I used coupe glasses, and look how beautiful they were!) pour the ruby port and add the cherry. Fill to the top of the glass with champagne.

See how easy that is? You have no excuse not to make this beautiful cocktail. Though, you might not want to tell your significant other the story over your romantic dinner… 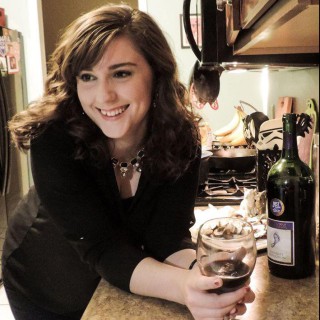 Twenty-something. Banker by day, kitchen crusader by night. Come to my house, we have wine.

With All My Affection

darla cooks
a whisk and a spoon

Recipes from the Melting Pot of my Antipodean Kitchen

recipes from a food stylists kitchen